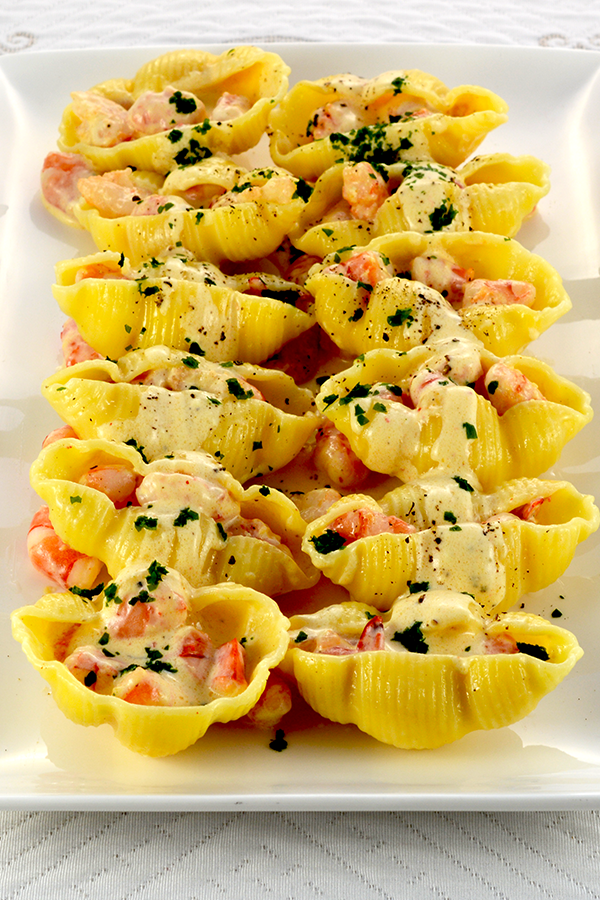 Shrimp Newberg stuffed shells, oh my that Newberg sauce is so delicious! These shrimp stuffed shells are easy and quick to make for an awesome dinner, they’re also delicious as an appetizer or starter if you’re entertaining!

A little bit of history:

Lobster Newberg was originally introduced and named after Ben Wenberg, a wealthy sea captain engaged in the fruit trade between Cuba and New York.  When on shore, he customarily ate at Delmonico’s Restaurant.  One day in 1876, home from a cruise, he entered the cafe and announced that he had brought back a new way to cook lobster (where he originally got the idea for this new dish has never been discovered).  Calling for a blazer (chafing dish), he demonstrated his discovery by cooking the dish at the table and invited Charles Delmonico to taste it.  Delmonico said, “Delicious” and forthwith entered the dish on the restaurant menu, naming it in honor of its creator Lobster a la Wenberg.  The dish quickly became popular and much in demand, especially by the after-theater clientele.

Many months after Ben Wenberg and Charles Delmonico fought or argued over an as-yet-undiscovered and probably trivial matter.  The upshot was that Charles banished Wenberg from Delmonico’s and ordered Lobster a la Wenberg struck from the menu.  That did not stop patrons from asking for the dish.  By typographical slight-of-hand, Delmonico changed the spelling from “Wenberg” to “Newberg,” and Lobster Newberg was born.  This dish has also been called Lobster Delmonico. (Source What’s Cooking America)

Newberg sauce is originally made with lobster but is delicious with any seafood, here I used shrimp size 16/20 cut into small chunks, they were handier to stuff my shells.

Newberg sauce is pretty easy to make but it needs attention as it must absolutely not be overcooked, there are three egg yolks in the recipe that work as thickeners, if the sauce is overcooked the yolks will curdle and look pudding like, totally unappetizing!

If you are going to serve these shells as a starter, I guess 3 to 4 shells will be enough as they are quite filling.

♦ Once the sauce is ready you must serve immediately.

If you're looking for easy dinner recipes or ones for entertaining, please check my categories savory or among friends for more propositions.

Salt and pepper to taste

Cook the pasta according to the instructions on the pack, cook on a gentle boil as jumbo shells are a little fragile and I added 1 tbsp. olive oil into the water to avoid that the shells stick together, drain and drizzle with olive oil, stir delicately to coat all the shells

Into a frying pan over medium/high heat melt the butter, add the shrimp and cook until they barely turn orange, set the shrimp aside into a shallow dish

Add the white wine to the pan, stir to deglaze and cook until reduced to about half

Meanwhile, into a bowl, pour the heavy cream, egg yolks, salt and pepper to taste and the Cayenne, whisk, add to the white wine together with the shrimp juice at the bottom of the reserved dish, cook stirring constantly until the sauce starts to thicken, add the shrimp and continue to cook just until they are re-heated, taste the sauce and adjust seasoning if needed

Fill the shells with a good amount of shrimp and sauce, drizzle more sauce on top, if you have shrimp leftover distribute them around the plate, sprinkle with some parsley and serve immediately

If you like this recipe, please leave me a comment, rate it, pin it for later or share it, Thanks! It means the world to me!

Hello! All photos and content are my property. Please do not use my photos without prior written permission. If you wish to republish this recipe, please rewrite the recipe in your own unique words and link back to Shrimp Newberg Stuffed Shells

Laura
This comment was minimized by the moderator on the site

What an interesting story, Patty. I need to look for this recipe on the menu since I am right in NY. We were planning Christmas eve 7 fishes menu and this is certainly a good one to add.

Thank you so much Laura, you can make the seafood alone and serve it on a piece of toast or puff pastry, that's how the original lobster newberg is served. Enjoy New York to the fullest my darling!

Ramona
This comment was minimized by the moderator on the site

OMG Patty, these shells not only look delicious but they are so pretty and super cute too! I l cannot wait to try this delicious recipe as I am sa huge pasta and seafood lover. Yummy

Thanks so much Ramona, glad you like it, we really enjoyed it!

Oh, Patty, Eric is going to love this one! I can't wait to show him! He will want to make it immediately! I love the stories behind our favorite dishes, as well! Thanks for sharing!

Thanks so much my Beth,it is so delicious I can't wait to try this Newberg sauce with other seafood!

Pasta shells filled with shrimp look so cute, wonderful party food. I love to read about how some traditional recipes have become famous in restaurants or as street food.

Thanks so much Mayuri, this dish has an interesting story indeed!

Caroline
This comment was minimized by the moderator on the site

What a fascinating story to a tasty dish. Love the idea of filling the shells with shrimp and that rich sauce.

Thanks so much Caroline, I also found the story behind this dish very interesting and this Newberg sauce is so good!

There are no comments posted here yet 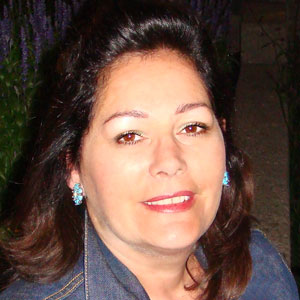 Hi, I'm Patty, welcome on my website. I am proposing quick and easy meal and dessert recipes for everyday and special occasions made with simple and delicious ingredients. Thanks for your visit, and please come back anytime for more recipes!